Some notes re how I have used LEDs for decorative uplighting in between ceiling beams. The photos in this pic are in our lounge, and note they were taken in daytime... they are considerably brighter at night. It actually looks like there are strips also at the top, but this just a reflection from the white ceiling (and is less noticeable in real life). Also, the lights look very yellow in the photo (they are not). The strips dimmed to about 50% brightness. A shot at night on about 50% brightness. Honestly it is really hard to show in a photo though, it looks a bit more diffuse in real life, and colours are different. There is another couple of metres you can't see here as I am working on the far wall and it is behind a drop sheet. 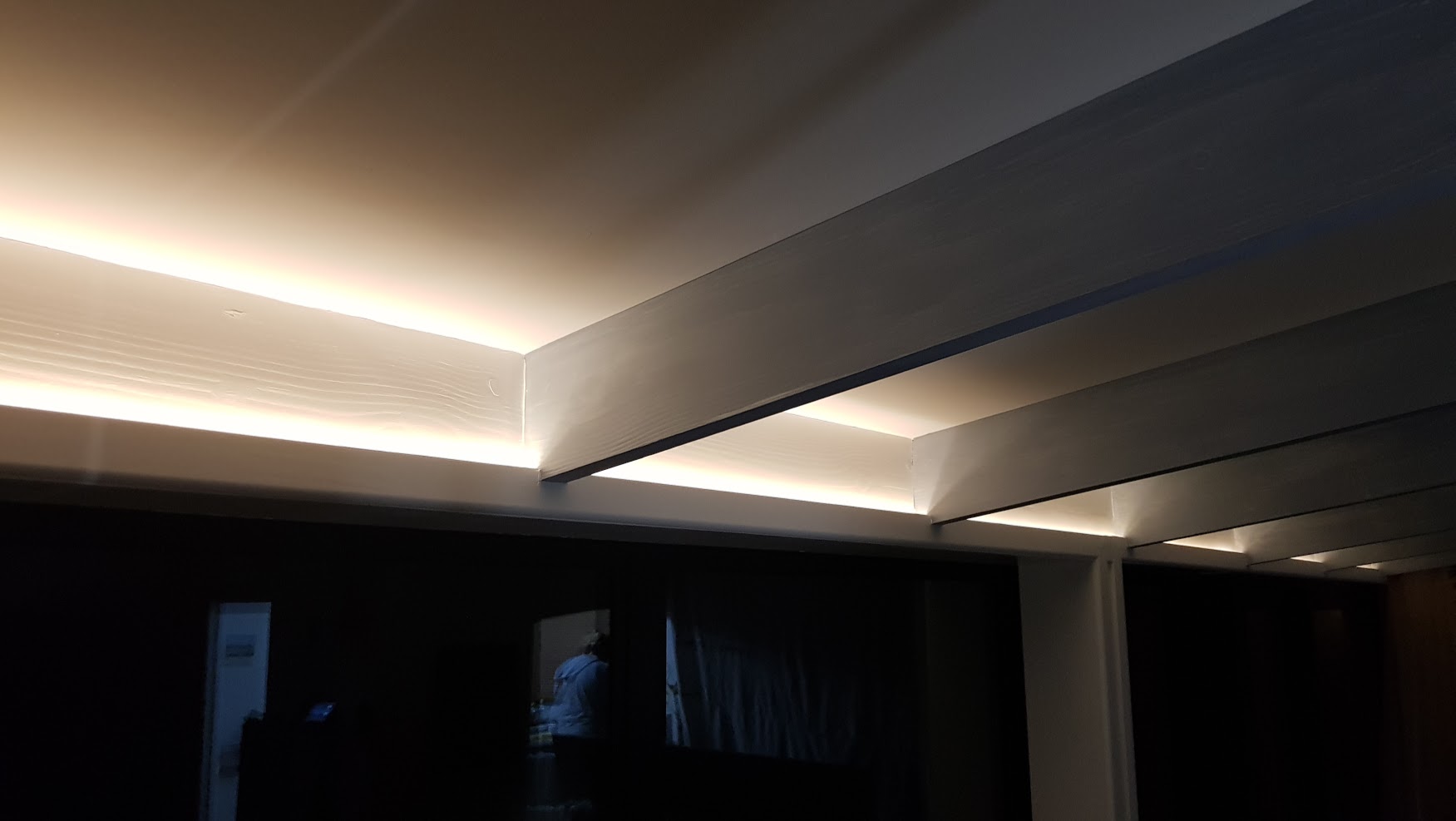 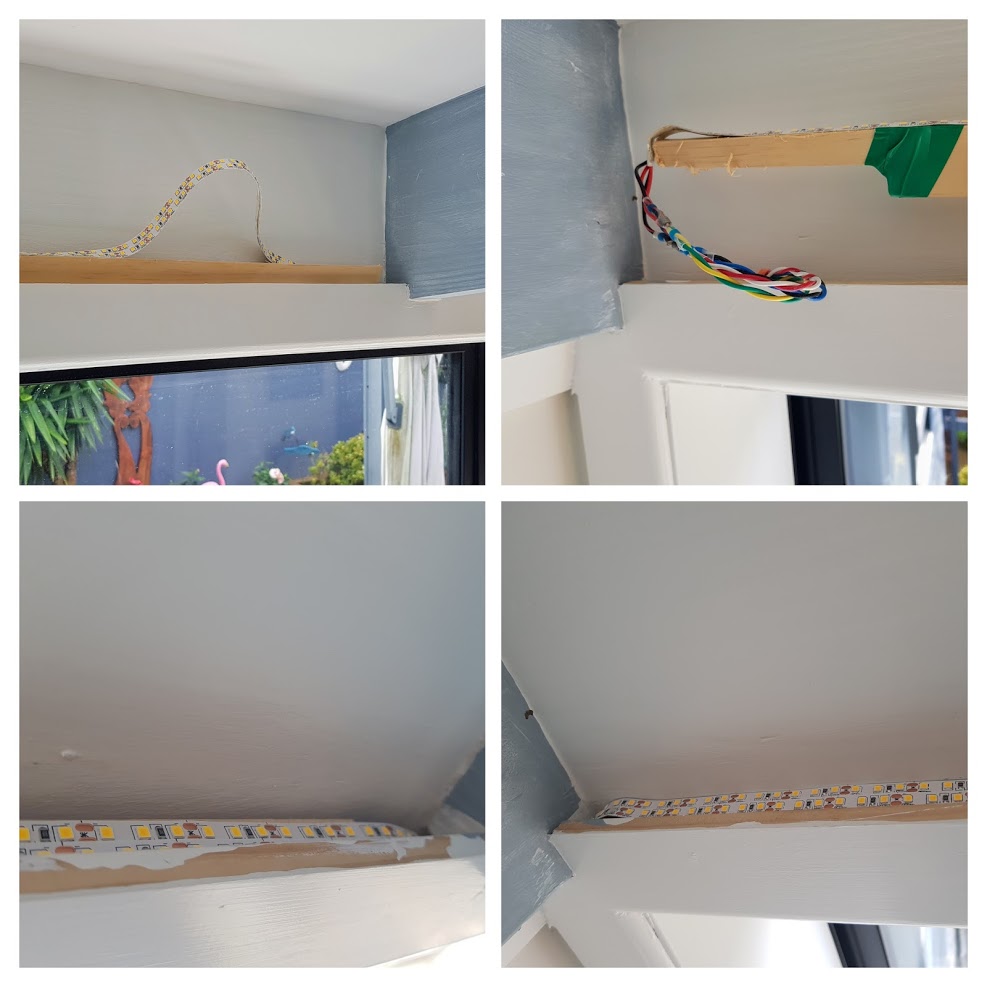 Lounge uses just over 14m of strip, laid in 2 rows. The strips are a slim 8mm wide so I could fit the two rows in.

When we had the large window and triple slider door installed, the frame sat slightly proud of where the original window was. Originally, when looking at framing around the window I could have used a couple of thicknesses of Gib to line above the window (it was an uncovered stained beam before this) but decided to paint it white, and leave the frame with nothing behind it. This gave a channel approx 18mm wide the full width of the lounge.

The frame trim is 60mm tall which left about a 50mm channel to put the LEDs in. First attempt I found they were way too low set in the channel so ripped down some timber trims to around 40mm x 16mm and sat it on that. Having it on a trim does make it slightly easier to remove if needed. The LEDs now sit less than 5mm from the top which is perfect - if they sit any higher you can see the odd LED if you are tall... and minor spotting from each chip in places.

I was careful to lay each strip with LEDs offset to also avoid spots of LED light and having both strips on does this nicely.

I didn't want to cut in to any of the beams, and the house is slightly wonky (1950s... with LOTs of additions over the years). Most beams nicely had a flat spot which enabled routing strip under them, but the last few I needed to dig slightly into the window frame to get access through and keep everything level.

On the left hand side, I had fed a 6 core 0.64mm cable though and up into the ceiling (cores are doubled up)

I used a 12V 20A switchmode power supply (around NZ$30 landed from China) mounted in the ceiling and powered from a Zemismart switch in the lounge (relay on/off control only). This feeds to a H801 5 channel LED PWM controller (designed for controlling RGBWW, but great also for multiple single strips, and the interface in Tasmota can account for this)

Currently when installed, the Zemismart switch will just switch the strips on though the H801 (i.e the H801 powers on and off). You can set dimming via the web interface and the H801 will remember the setting even though it is depowered (and switch-on time is less than a second). This is temporary, as the next step is decoupling the Zemismart relay in Tasmota, and having the buttons do the dimming over wifi control.

The H801 should easily control 4A per channel, and measuring the strips was about 2.4A for a 5m strip so about 3.4A for a 7m length (giving around 80W of lighting all up)

I used commands from a wallswitch (zemismart) to register single, double and triple clicks and node red to select the LED brightness. Tasmota has built in ramping/dimming which is easier than using node red to step values.


// The input message is the MQTT message from the device
// once setOption73 is set to just check presses and
// decouple relays.
var button = msg.payload.Button1.Action;  // SINGLE, DOUBLE, TRIPLE, HOLD

// store a different speed for dimming as we want
// dimming to off to be slightly quicker
// Tasmota has the Speed2 command for one off changes
var fastSpeed = 5 ;
msg2  = { payload: fastSpeed };

This is the useful link to setting up multiple single channel LEDs in Tasmota
https://tasmota.github.io/docs/Lights/
Essentially you just activate to turn this on. This must be a relatively new feature as this link from Feb 2021 led me astray with a template that only set a single channel PWM. The standard H801 template and setoption68 worked for me to give 5 individual dimmable PWM channels (plus independent on/off for each)