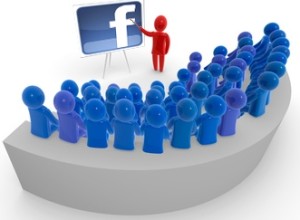 Facebook has become the default social media platform for the majority of people worldwide.  I’ll start by saying, for me it was a case a couple of years ago that if I wanted to keep in touch (and get back in touch) with many friends and extended family on a regular basis, this was the only real option.

However, I understand technology and have used the internet for a number of years which I think allows me to make sensible decisions based on this experience.

Facebook is not the only game in town, but though marketing, promotion and sheer takeup over time, it has become the default, in a similar way to the Microsoft’s Windows operating system and NZ’s Trademe for selling your stuff Down Under.  But there is a major flaw in the Facebook model and often people find out about it too late, either before they have had it explained to them, or before they realise the possible impacts.

Herein lies the problem.  I’m sure you have heard rumours about Privacy issues on Facebook before, but like many users, it has never been explained what the issues are and what you should do.  The vast majority of people will assume that Facebook will take care of privacy for them by default, because – hey, you’re just a dumb user right?

I not going to cover all my recommendations for account ‘lock down’ to improve privacy here (but plan to do so at some stage), but at least this should explain the fundamental issue I have with the facebook design, this problem this causes and a quick fix suggestion regarding what you should do.

Facebook was designed from the ground up to be viral, exponential and inclusive.

If you could attempt to build a website that everyone in the world could connect to and interact with everyone else in the world, wouldn’t you try?  From day one, they promoted openness and encouragement to connect to as many people as possible.  This model allows them to see what users’ interests are, who and what type of people, business and activities they are interested in so, they can target their advertising as closely as possible. Why would everyone not want this?

In Facebooks’ defence, their original model was that everything you posted was made public on the internet.  It least we have moved on from that nightmare privacy scenario.

But consider the Facebook model compared to sharing information in real life and these recent examples I have experienced recently:

A recent case with one of my friends was that their daughter, of ‘tween’ age group was heading to a school dance.  The original plan was to attend a friends house with others to get ready.  For whatever reason the pre-dance plan was ‘cancelled’, but… photos appeared on Facebook of the friends getting ready at the friend’s house.

So… can you imagine how devastated the daughter was?  Of course in a non-facebook world there still could be fallout, but the default inclusive design or Facebook makes this more likely.  Does the young poster understand the impact and how wide the information spreads once they click the enter key?  If it was a real life rather than a virtual post would they be so cruel?

An ex girlfriend posts an anniversary of her first date with the current boyfriend.  What they fail to realise was that the date of the Anniversary overlapped the dates they were with the last boyfriend.

Hmmm. Did they realise they are telling 150+ of their “facebook friends”… that also still include the ex?  I’m sure it wasn’t the intention to ever let this slip, and in real life this would be unlikely to be a big deal, and maybe not even picked up.

A woman, having resigned from work and on her last day, counts down her last few hours to getting home and finishing up forever.  In the mean time, one of her facebook ‘friends’ has broken into her house and stolen a bunch of stuff.

What greater way to be sure that someone (who you might have bumped into at a party once and “FB Friended’ them) isn’t going to be home for a while. There are plenty of similar examples around.

People fail to realise time and time again that their facebook friends aren’t really their ‘real friends’.  Facebook by default encourages you to ‘tell everybody you have ever met, everything about you’.  This is wrong, but you can’t change it.  In the old world of sending a letter (if you remember back that far), do you start with all 250 people in your address book and decide which ones ‘won’t’ get the letter?

This model of Facebook could easily be solved.  In fact Google+ designed this in and the scenario is built in to many other similar models.  With G+, when you post something, you actively have to choose which ‘group’ you send to.  It could be say ‘Work people’, ‘Close Family’, ‘Scouting Parents’, or however you decide to group people.

…What you can do

Luckily, with facebook you can tell everybody ‘but’ exclude some people, which I guess is the next best thing.  This isn’t actively promoted, but hey do hint to this fact by putting in a default special ‘friends list’ called “Restricted’.  These lists allow you to group your friends into categories and then post to everybody ‘but’ one of these lists.

Choose some lists you want to start with, for example: 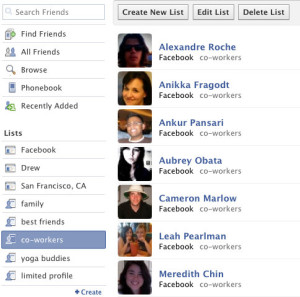 (People won’t be notified of you adding them to lists, so don’t panic and you can make as many as you like)

If you post something, then think carefully about the impact and who you want to tell.  Maybe just the school mums and dads. Maybe just the extended family.  Look at who you would normally tell in real life and be exclude the lists of people who don’t need to know. 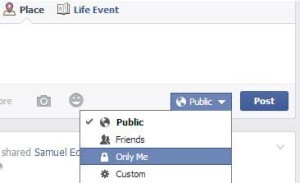 Before you post, look at the little dropdown list and choose ‘Custom’.  You will then get the option to choose ‘Friends’ ‘Except…’ and you can pic from the groups you want to exclude.

This is a quick summary, but isn’t the full story, as in the end it is better to set up a default in the facebook settings, and there are plenty of other privacy settings I can show people that makes posting to facebook easier and safer.

Another useful fact is that you can add people to an ‘Excluded’ or ‘Restricted’ list, rather than delete or ‘de-friend’ them entirely.  This sounds a bit petty, but actually – people can notice when they are defriended… this way they think you have just gone a bit quiet.  This is a big deal, for at least some people in the social media world.

If your children are old enough to be on Facebook, then explain this to the above scenarios carefully so they understand what they post might be seen by all.  OK this might encourage them to have a ‘Mum and Dad’ list… but I would hope they wouldn’t use Facebook to hide things from you anyway. 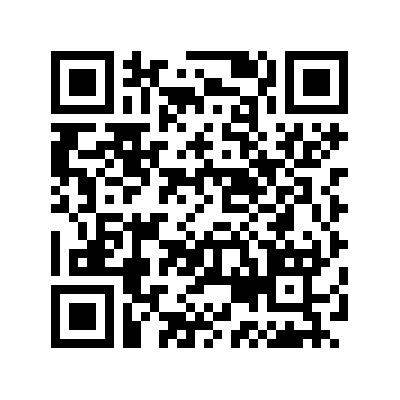