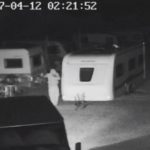 Caravan thefts in New Zealand have become a lot more common in the past few years, and every day or so you hear about another one going missing. Caravans are pretty easy to steal by themselves, as they are light weight, usually easily accessible on a driveway… and they sit home alone when people go to work.

An often touted reason for thefts are that they are taken for use to manufacture P/Methamphetamine in (and then dumped) but I have spoken to some NZ police detectives who say they are just more likely to be taken to remote places, repainted and used as a sleepout. Common models can be quickly disguised with a couple of cans of spraypaint and maybe a replacement number plate and they are much easier to re-register than a car. Most NZ caravans won’t have a VIN and it is only from the early 90s that VINs were found on imported ones.

So what can I do to lower the risk of theft..?    …here are a bunch of security tips.

The first thing to look at is where you keep the van. Unfortunately if you are like us, you probably don’t have the luxury of large secured properties or being able to keep caravans in a locked and alarmed concrete shed, but if you can have your caravan out of view from the road, down a driveway and then behind fences and gates you are decreasing your theft chances already. This can go the other way though, if you can’t see the caravan, it also means your neighbours may not see someone hooking it up to it and driving it away. Blockage can help, eg if you have a car always parked in front of a caravan, they would have to move that first which certainly adds to the inconvenience.

Camera surveillance and alarm systems are a good thing too but this article would get a bit long if I went into these suggestions (see my other blog posts)… and also cameras don’t stop the van get taken (but may help the police later).

These are available from the local Supercheap or Repco store (or online). A ball lock is a small metal ball that expands when a key is inserted. A Coupling lock is similar, but clamps over the coupling and usually uses a padlock. When either are in place, you can’t put the tow hitch on a towball, so it is a quick theft deterrent. My recommendation is that although these are a good secondary anti-theft method, but by itself it will not stop the caravan being taken. There is also a pin hitch lock for couplings that have a pin style, and I have this type on my trailer (actually I just use a long padlock).

Why do these not stop thefts? You don’t need a towball to to a caravan if you are just nicking it…. just hook up the safety chain – or as I have also seen wrap the safety chain (or another short chain) around the towball. It won’t do your car bumper any favours, but then the car is likely nicked too right? I’ve even seen a standard trailer coupling completely unbolted… if not welded in place it is usually just 2 or 4 bolts and a basic replacement is only about $60. Unbolt, fit new, and drive away.

The coupling style lock (and pin hitch lock) is also useful a it can also be used when on the car to stop it being unhitched (see the photos). I have a coupling lock on one of my caravans (it only works on some styles of coupling), but frankly with enough wiggling an a bit of leverage it can probably be popped off, and the padlock it came with is only a 10 second job with a decent pair of bolt cutters.

This is probably the simplest and easiest security measure you can take that will have a reasonable chance of stopping a caravan being stolen. Choose carefully before you buy one though, I  had issues with one type on our small caravan (early Lilliput) as it wouldn’t fit properly in the wheel well.

Also, choose one that is solid and covers the wheel nuts completely, as taking a caravan wheel off is usually pretty easy and then that defeats the purpose of having the clamp in the first place.

The crab claw (2 arm only) type ones are pretty flimsy and easy to defeat with a crowbar so I would not recommend them except as a secondary measure. I see the same model of those on trademe anywhere between $18 and $130, so I think someone is trying to make a quick buck.

The photos show a few types, I have the yellow and orange style ones, and the yellow one shown was by far the most robust, and retails as if this moment (on Trademe) for about $50. That one has a full wheel cover, and clamps with a handle winding mechanism which locks away under a flap.

Simple ball and coupling locks, or even a wheel clamp will NOT in themselves prevent your caravan from being stolen if someone really wants to take it. Multiple security types, that inconvenience a thief will however make it much harder. 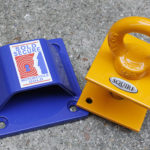 A very serious method of stopping theft is to take a leaf from what the classic motorcycle owners do. Get yourself a serious anchor bolt (or two) and concrete it into your driveway (or garage floor if you are lucky enough to be able to store it indoors). Secure a chain around your drawbar and lock it with a high quality padlock.

There is a bit of an art to proper lockup though, and the anchorbolt needs to be designed for the job. Try and keep the chain and padlock off the ground and awkward to access, as a sledge hammer attack – although noisy can break some chains in just one strike (and a can of freeze spay will help this). If it is awkward to swing a sledge hammer onto it, or get bolt cutters or grinder in there easily, it makes the theft that much harder.

An even better option is a removable bollard (I have stainless one similar to the photos). If this is concreted in the ground by the drawbar, not only can you chain the caravan to it, even if the chain is broken the bollard is still in the way to stop it being towed.

OK, this won’t help stop a theft, but may act as a deterrent and will certainly help with a recovery. It is recommended that you etch your caravan registration plate into a few of the windows. This is common for cars (usually the VIN is etched), and you can get kits to do it, or a glass or security company can. You can even get stickers to note that the rego is etched, but at the end of the day is someone is stealing the caravan to just use for a few weeks to mix chemicals up it, they probably don’t care.

Another suggestion I often hear is to paint the registration in large letters on the roof. Frankly that is a bit gaudy for my early ’60s models, but if one was driving along and you saw the rego from your second story didn’t match the roof banner, you might report it to the police I guess? Also, when the police helicopters are out searching the countryside for your caravan, or trawling through the many hours of street camera surveillance to find it, this will make their job a bit easier (yes, that was a joke…they have better things to do). There are auto number-plate recognition cameras around (I work in the industry), but no where near as many as the UK and other countries. Also, they recognise vertical number plates at street level, not roof painted signs.

Again, not an anti-theft method, but a good method of recovery (and deterrent, if you also use a sticker or two), I also see mention of GPS use in caravans. This sounds simple, and the comments of ‘just get an old iphone and hook it up with ‘the find my iphone’ app, sound even simpler. It isn’t actually that simple, and I’ve bought a number of GPS tracking systems in the past for various things.

Firstly, you need to have your GPS powered. At all times. If the caravan is hooked up to mains at home, this is great as it means you can keep a GPS system topped up ready to go. A solar system will do this fine too, if you keep it in check. How long will it keep running for if stolen? Well this will depend on what you have powering it. A custom system using it’s own battery (say 7AH Gel cell or LiPo), hidden away and disguised to a thief doesn’t find it may give you about a month to do some tracking (or longer if your solar system is still operational).  Some now say they will run 30-90 days with their own 5Ah or more battery, but you’ll still need to keep that topped up remember.

Secondly, you need a GPS signal. Inside a caravan is not a great way to get GPS (it is generally after all, a metal box), so something with an external GPS antenna is usually a must unless you can put the whole box outside (many are waterproof which is good). Your GPS unit needs to be somewhere not visible and not easily accessible, but the antenna needs to ‘see the sky’ either directly, or though a window. These antennas aren’t very large at all, but anyone who knows even a little about stealing caravans will likely know what a GPS antenna looks like, so it needs to be covered with something else (non-metallic).

Finally, you need internet. There is no point in having a GPS tracker, unless it can call back to tell you where it is. That means a SIM card, permanently paid up (pre-pay is fine), and always online. It doesn’t hurt to check it is working often too… there is nothing more frustrating that having a GPS tracker that you need to find and you realise there is no data left on the SIM card.  Prepay SIMs can be ready to go with as little as $20/year, but don’t forget to test the setup regularly.  Most from china will support the NZ phone frequencies, but if you get one that is 2G capable only, the only provider you can use here is Vodafone.  Even 2Degrees dumped their 2G network in NZ this year.

Finally, on GPS trackers, there are heaps available from china (and here are a bunch of links to some) but the models and quality change by the minute so these links may not work.  They are really cheap though, some less than $20.  Some will just use text messages to send locations updates, some will use data and show on a map.  You really need a little bit of skill to install one, as you’ll want to be sure to do some custom disguising and custom wiring etc. None are really an ‘off the shelf’ solution because of this customisation.  The easier they are to find, the more likely they are defeatable, and even then there is no guarantee that it will help with recovery at all if the caravan ends up being parked in a garage, or out of cellphone range somewhere.  A car alarm installer might put one if for you though if you need help.

If you really are still thinking about ‘the old iphone’ method, remember these have about a day or less of battery, have no external GPS antenna and you’ll need to ensure it never shuts down.  Good luck with that.

Someone thinks they are on holiday... #covid19 #se

People do say the #Noddy series was a bit sus.. bu

Those 'bird of prey' seagull deterrents aren't all 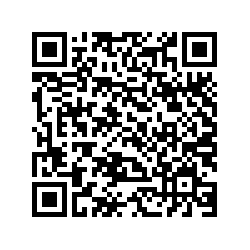